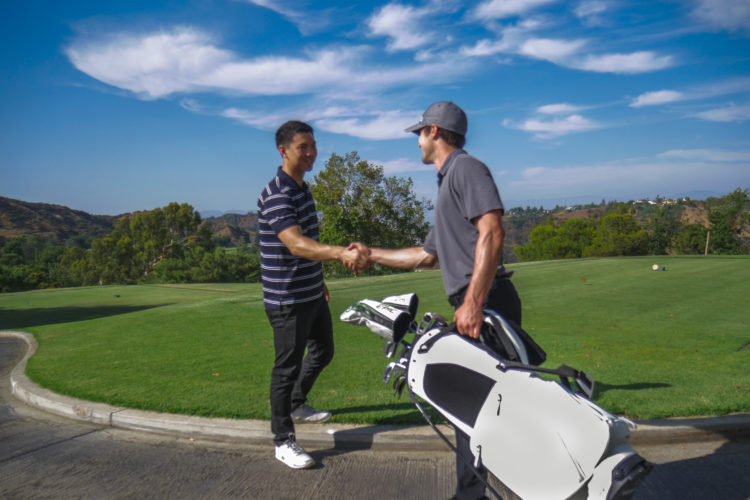 As Clublender grows, we intend to directly address the desires of traveling golfers. People who fit this description face a conflict: they enjoy playing with their own clubs, but in many cases they don’t enjoy the inconvenience and expense of sending or carrying their clubs to remote courses. For these people, Clublender wants to provide a set that is similar enough to the one a customer might have at home, or appealing enough for other reasons (convenience and the choice of novel technologies, for example) that the customer considers leaving his or her typical set at home and using a Clublender set instead. In this way, a Clublender set becomes a viable alternative to the at-home set when the golfer is traveling. But there’s another group of people who we think will find Clublender useful: people who are local to their playing destination and want to try out new clubs at a time and location that is convenient for them.

Traditionally, people try clubs by way of a few different methods: a custom fitting session, test swings at a retail golf shop (usually into a net, sometimes with a monitor or analytics), or a demo scenario at a golf course. These processes, especially the custom fitting, can be profoundly helpful for people, but can also be costly and time-consuming. Additionally, golfers being fitted may be at the mercy of brand partnerships that a fitter already has in place: a fitter might have relationships with TaylorMade and Titleist, say, but not with PXG. Suddenly, the fitting process is not about finding an optimal fit between the golfer’s game and the equipment available on the market, but rather between the golfer’s game and the equipment available to the fitter.

Lots of private courses, and some public, will offer clubs for people to demo. The term “demo” gets used in golf in the same way that it gets used in, say, skiing and snowboarding: to refer to a rental of particularly high value where the owner is open to or actively looking toward selling the gear to the renter, and the renter has a similar stance toward buying the gear. The Oxford English Dictionary defines this use of demo as being shorthand for “a demonstration of a product or technique.” This definition applies here: customers are getting a demonstration of what the golf clubs they’re considering buying are actually like, in contrast to a traditional rental situation where the clubs are intended to perform a limited role as a stand-in for the golfer’s favored set. The equipment that someone actually wants is not available, so that person is forced to rent clubs he or she doesn’t really want.

Clublender aims to solve this problem by allowing golfers, regardless of any affiliation with a specific golf club, to select the equipment that they’re most interested in trying. In this way, the Clublender set is the favored set, and no longer just a stand-in. We think that by delivering the clubs to and picking them up from any course in Los Angeles – and to and from just about any location in Los Angeles, for that matter – the process can be seamless. Golfers who use the service aren’t forced to choose a certain brand due to an arbitrary affiliation, or forced to make sacrifices because the clubs they want aren’t available. We believe that the service can meet the needs of a traveler who is coming to Los Angeles with the specific intention of playing some golf or of a local who wants to try new equipment.